****Nominated for an Agatha Award for Best Contemporary Novel for 2016

An autumn chill has settled over Busman’s Harbor, Maine, but Julia Snowden is warming up the town by offering lobster stew at the local diner. When her landlord discovers a dead body in the walk-in refrigerator, Julia must figure out who ordered up a side of murder. 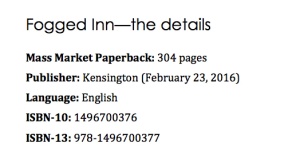 Nothing’s colder than a corpse—especially one stashed inside a sub-zero fridge. The victim spent his last night on earth dining at the restaurant bar, so naturally Julia finds herself at the center of the ensuing investigation. Lost in the November fog, however, is who’d want to kill the unidentified stranger—and why. It might have something to do with a suspicious group of retirees and a decades-old tragedy to which they’re all connected. One thing’s for sure: Julia’s going to make solving this mystery her early bird special…

This 4th installment of the Maine Clambake Mystery series has been nominated for the Agatha Award for Best Novel, and deservedly so!

…a cleverly crafted, character-driven whodunit that engages readers both intellectually and emotionally.

…a snappy murder mystery with a complex, well-connected plot…

…the mystery was first rate and it kept me reading.

The perfect atmosphere of suspicion and fear that will draw you in!

An entirely surprising conclusion wraps up this smartly-plotted mystery whose heroine is intelligent and as appealing as the gorgeous Maine coast.

The characters are well developed, delightfully eccentric and realistic Mainers.

Fogged Inn is the best one to date, and it will leave you anxious for your next chance to visit with Julia.

I started reading and I just couldn’t stop.

Escape with Dollycas Into a Good Book, February 2016

…my favorite in her series by far!

Cinnamon and Sugar and a Little Bit of Murder, February 2016

This is the 4th book in her Maine Clambake Mystery series and I have to say they just keep getting better.

Quite honestly, there is not one thing I would change about this book…

Fogged Inn is a big thumbs up.

A fantastic slice of life in Maine with great food and good friends – you can’t go wrong with this cozy series!

Julia is such a great main character and the story is always wonderful.

The hallmark of this series has always been the rich characters, and I enjoy that more dimension is added as the series progresses.

…the pace is excellent, and when the twists arrive — and oh wow, do they!

…a fun read with great writing enhanced by an enjoyable and suspenseful mystery and great characters!

I simply could not turn the pages fast enough.

…you can’t put the book down!

I was captivated from the beginning

Cinnamon and Sugar and a Little Bit of Murder, February 2016

A Question of Class

Twists and Turns in the Mystery Road